Menu
3B Parent Lunch Wednesday 29th January Arrive for 12pm at the school office.
Log in

We are an International School. A lot of the work we do in class helps us to understand our place in the wider world and where we fit into our global community.

We have been working alongside a school in Morocco!

The teachers shared some of their planning and resources for Science topics, including electricity. They sent us some videos and pictures of their work! 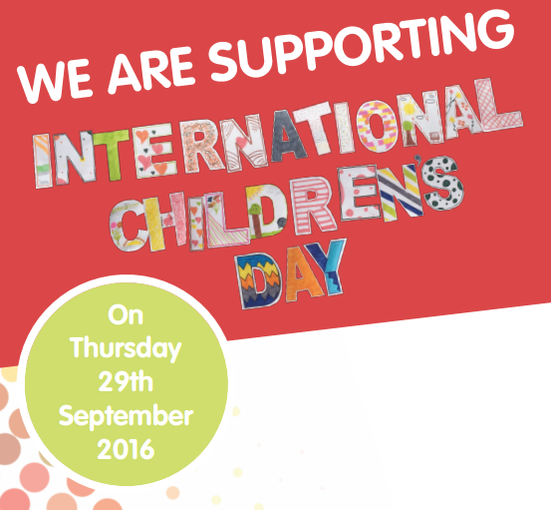 The children all took part in North Tyneside's International Children's day. We looked at the lives of children across all of the continents in our different classes!

The children took part in a whole day dedicated to Peru and our charity international link Picaflor House. We spent all day doing lots of activities and raising money. For more about Peru day, please look at our dedicated page on the website.

A fantastic visit from the Zulu theatre company! 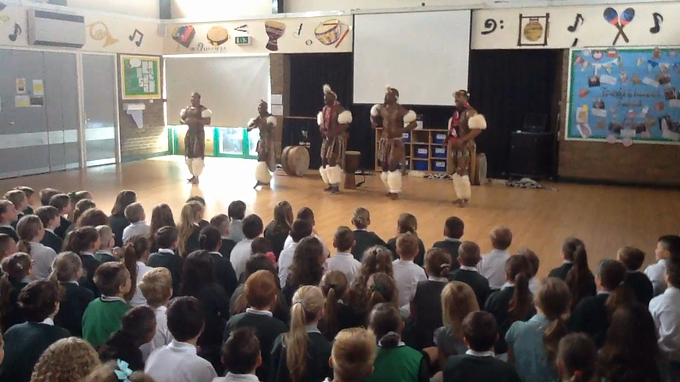 Year 6 used their French speaking and listening during their adventures in France this Summer!

We have been lucky enough to have a Chinese club, Portuguese club and Spanish club running this year!

Mademoiselle Sen visited from Belgium to teach French in school and ran a French after-school club too!

We were lucky to host some international students in our school from Indonesia, China and Azerbaijan 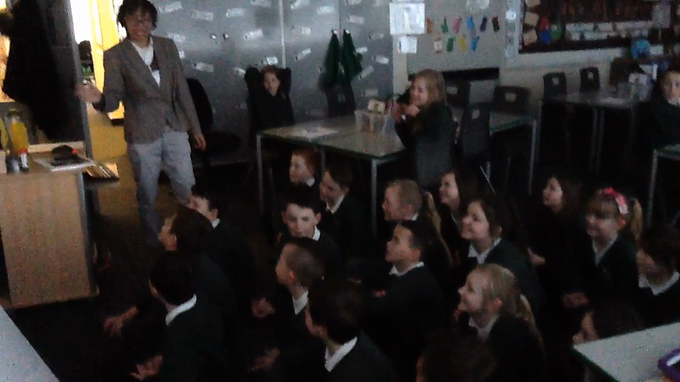 Our international visitor Ikis has spent the afternoon teaching us about her home-country Indonesia. We have learnt all about the different island and cities and even looked at how we could help solve their problems!

We also got a chance to learn some simple Indonesian phrases. Well done Year 5!

We had an International Afternoon based on Australia in Spring Term. We did lots of different activities like finding Australian monuments, learning about the Australian flag, creating didgeridoos and learning about Fiji!

We had an International Afternoon based on America in Autumn Term. We had lots of fun doing different activites like finding the American states, learning the National Anthem, debating the death penalty and acting out American monuments!

The children in Year 2 got to say hello to Miss Robinson all the way from Dubai!

In June we were fortunate to have Mrs ten Broek, a German teacher from Christian Morgenstern Schule  in Darmstadt http://www.cms-darmstadt.de/visiting us for a week.  She spent most of her time with 3F, telling them about life in a German school. The children in 3F wrote letters to the German children,  and made a book and video about Bailey Green for her to take back with her.

In October we were delighted to be invited to the Tyneside Cinema in Newcastle to collect our award. Attending on our behalf were Mrs Taylor, Mrs Forrest, Sam and Eve.  The awards were presented by climber Andy Kirkpatrick.

In September, to celebrate European Languages Day we held a European afternoon in school. Children remained with their class but rotated around four different activities, learning about the languages, culture and geography of Europe.  They danced, sang, coloured and ate their way around countries such as France, Spain, Norway, Italy and Greece.

I wonder where we will visit next term?

Rachel from the charity Send A Cow visited us and explained in assembly why a cow is such a useful gift to give to a family in Africa.  The milk can be drunk by the family and sold to provide an income.  They can even use the wee and poo to make fertiliser and pesticide to help grow better crops!  When the cow gives birth to a calf they can give it to another family to help them too.

Kai and Kayla sadly left Bailey Green earlier this year to go and live in Spain, but we have been able to keep in touch with them via email, letters and Skype.  What a great surprise when they popped back for a visit last week, while Year 3 were learning all about Spain for their topic!  It was a great opportunity for the children to ask them about life in Spain and what it's like attending a Spanish school.

Mrs Taylor was very impressed to be sung to in Chinese!

The choir took part in a concert at the Whitley Bay Playhouse as part of our Tour de France project.  They sang beautifully in French.  You can watch their performance on the podcast page.  Other classes have been involved in the project too.

Year 5 have been learning about missionaries in RE.  We were delighted to meet Tym who works as a missionary in Mexico and popped in to tell us all about the work he does building houses for poor people.  He also told us a lot about schools, food and Mexican toilets!

Amber wrote: "I have learnt that in Mexico they actually have our restaurants, like McDonalds and KFC.  Lots of families live in shacks they made themselves, which are not very useful at all.  So Tym and other members of the Youth with a Mission are trying their best to give these poor people proper homes.  A truck has to come round every day just to give the people water to survive."

Hannah found out: "70% of Mexico is really poor.  Missionaries build new and better homes for the very poor people.  People in Mexico can get very ill.  One example why they get ill is that they breathe in the dirt on the floor because they have no carpet or concrete on the floor."

Josh understands the link between what missionaries BELIEVE and what they DO: "Missionaries are Christians that build houses for poor people and they don't get paid for making them.  They also believe that God tells them to build a house for the poor."

The Year 6 children have just returned from their trip to France.  They visited some historical sites and went to a cider farm and caramel factory.  They practised their French in the market at Bayeux and ate lots of "des glaces".  They made some new friends with children from Amberley Primary School who they will go to high school with in September and met some French children from a school in Paris and challenged them to what else but a football match!

Our phrase book was very useful when we were tasting l'escargots!

Mrs McCafferty has been running a Spanish club this term.  The children have learnt to count, have tried on Spanish costumes, played games and learnt songs.  Go to the podcast page to watch them do the Macarena.

We're getting very excited about the World Cup.  Each class has two teams to support... and the winning class will have an International football themed party.

We were so sad to say goodbye to M. Adda, our Comenius assistant from Belgium.  He has spent three months teaching us French and we've taught him lots of English phrases... We hope we were your cup of tea!  Good luck and best wishes for the future.

Miss Chowdhury got married during the Easter holidays.  After the wedding the nursery children looked at the photos and talked about Islamic traditions and customs.  Some children shared their own experiences of weddings they have been to.  Welcome back Mrs Ali!

Where in the World is Africa?

Reception used the book "Handa's Surprise" as the basis for their Africa topic.  They taught African dance to the Nursery children, sampled lots of African fruits and turned the creative room into Handa's house which Mrs Badminton, our class governor, enjoyed visiting.

We had a brilliant time on Africa Day.  The whole school took part in a day of singing, drumming, dancing, cooking, playing games and doing artwork.  Parents joined us for the day and we had some African visitors to share their first hand experiences of living in or visiting Africa.

There are lots of photos in the gallery and some podcasts showing us dancing and singing. Look at some of the fantastic artwork we did.

Year 4's topic on Australia produced some fantastic art work and the children did their own research projects for homework.  The children even had a chance to talk to Miss Butler's brother in Australia via Skype.  You can watch their conversation on the podcast page.

Our library looks fantastic with all our different mobiles from many countries.

Into the Death Zone

Year 5 learnt about mountainous regions of the world, focusing specifically on the Himalayas and the Alps.  They discussed the impact that climbing has on the economy of Nepal and found out about the dangers of climbing the world's highest peaks.  They produced some great landscape paintings and made their own mountain ranges, finding out about the purpose of contour lines on maps.  They really enjoyed their visit to the climbing wall.

During Year 5's residential trip to High Borrans in the Lake District the children collected weather data and photos which they sent to our partner school in Slovenia.  We received some weather data and photos from the Slovenian school which we used to compare weather and landscape.  We might not have as much snow as they do but we did find a little patch in a shady corner!

In February our ski club went to Scotland for the weekend to ski at Cairngorm. Afterwards we shared our photos and podcasts with our partner school in Slovenia.  They were very surprised to hear that the children had learnt to ski on a dry ski slope - they had never seen one before and thought it looked very funny!  You can see a lot more from the trip on the gallery and podcast pages.

We are very excited to welcome M. Adda, our Comenius assistant from Belgium, who will be with us for three months, teaching French and telling us all about life in Belgium.  He was delighted with the reception committee who went to collect him from the train!

We had a great time on World Book Day.  Teachers swapped classes and read stories from around the world to the children.  Here are just some of the stories we read:

Mrs Briggs read "Hue Boy" from the Caribbean to RS

Mrs McNichol read "The Carnival King" from Brazil to 6M

What a lot of countries we visited!  Have a look in the Gallery for more pictures.

Nursery children have been finding out about Chinese New Year.  They took their dragon on a walk through school to share what they have been doing.

Year 1 found out lots of information about life in the Arctic Circle and the animals who live there.  We produced some fabulous art work.  We even built our own igloos from milk bottles and playdough.

We did some writing in our ICT lessons and sent letters to our partner school in Norway to find out about life in the Arctic.

Children in our partner school in Slovenia have been learning about food.  Year 1 shared with them some work they have been doing in PSHE about healthy eating.